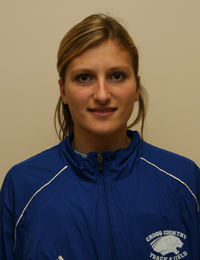 
EASTERN: Anci is a sophomore pole vaulter... joined EIU team during middle of 2007 indoor season... ranks fourth on EIU Top 10 list for both indoor and outdoor pole vault... scored points for EIU at the both the OVC Indoor and Outdoor Championships.

PERSONAL: Anci is majoring in management… daughter of Deni and Ivo Borozan… biggest influence on her sports career has been her dad (Ivo) because “he has been a professional weight lifter for more than 30 years and I traveled a lot and learned about the sports life from him.”