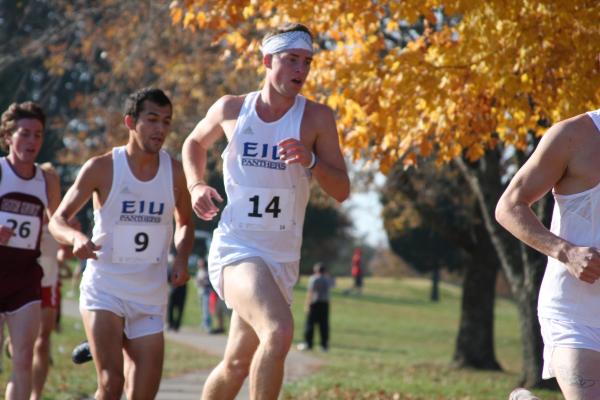 CHARLESTON, Ill. – Eastern Illinois will add five new members to its Athletic Hall of Fame as the Class of 2018 was announced. The ceremony will take place surrounding the Panthers October 6 football game with Murray State. Entering the Hall of Fame for the Class of 2018 are former athletes David Holm, Jeff Mills, Ta'Kenya Nixon, Carrie Riordan and C.J. Weber

DAVID HOLM (Men's Track & Field / Calgary, Alberta, Canada / Western Canada HS)… David Holm distinguished himself as one of the top middle distance runners in school history as a member of the cross country and track teams from 2006-10.  Holm was a standout at the 800 meter distance placing 12th at the NCAA Indoor National Championships in 2009.  He would have earned second team All-American honors but was not awarded that honor at the time based on a provision that only granted that status to US born athletes.  Holm was a three time Ohio Valley Conference Champion in the indoor 800 meter run setting the Lantz Facility record of 1:49.6.  He earned All-OVC first team honors three times and second team All-OVC honors another five times.  His 800 meter times rank second on the EIU career indoor list and sixth on the EIU career outdoor list.  In 2012 Holm placed seventh in the 800 meter run at the Canadian Olympic Trials.

JEFF MILLS (Football / Winnetka, Ill. / New Trier HS)… Jeff Mills was a play maker at linebacker during his career on the football field for the Panthers between 1985 and 1989.  He set then school records for tackles in a game (29 in 1988 vs. Missouri State) and career tackles (426) as part of two teams that reached the FCS playoff quarterfinal rounds in 1986 and 1989.  Mills recorded 100 or more tackles in three seasons and currently ranks third in career tackles and fourth in career solo tackles.  He made 91 solo tackles in 1988 which ranks fourth on the EIU single season.  He was named second team All-Gateway Conference in 1988 and earned first team All-Gateway honors in 1989.   His 29 tackles in a game remain second all-time in both school history and Gateway/Missouri Valley Football Conference history.

TA'KENYA NIXON (Women's Basketball / Michigan City, Ind. / Michigan City HS)… One of the most dynamic players in program history, Ta'Kenya Nixon helped lead the program to a successful run on the hardwood from 2010-13.  Nixon was named the Ohio Valley Conference Freshman of the Year as she earned first team All-OVC honors in all four seasons.   Nixon was twice named the OVC Defensive Player of the Year in 2010 and 2012 as she helped lead EIU to four straight post-season tournaments.  The Panthers won the OVC regular season championship in 2010 and 2013 advancing to the Women's NIT in 2010, 2012 & 2013.  The team played in the Women's Basketball Invitational (WBI) in 2011.  Nixon ended her career as the school's all-time leading scorer with 1,924 points setting the record in EIU's WNIT win at Missouri.  She ended her career second on the EIU career assists list (635), third in career steals (287), sixth in career rebounds (778) and first in career free throws made (531).

CARRIE RIORDAN (Women's Golf / Spring Valley, Ill. / Hall HS)… Carrie Riordan was a standout member of the women's golf team from 2005-09.  Riordan was named a first team All-Ohio Valley Conference selection in 2008 and earned All-Tournament honors in both 2007 and 2009 with top five finishes at the league championship event.  In 2009 Riordan was the individual medalist at the OVC Championships winning the title by three shots at Crooked Creek Country Club in London, Kentucky.  Riordan holds the school record for lowest season stroke average and ranks in the top ten for both lowest single round and lowest tournament score.  Following graduation Riordan played on the LPGA Futures Tour appearing in 43 career events.

C.J. WEBER (Men's Tennis / Teutopolis, Ill. / Teutopolis HS)…  C.J. Weber excelled on the court and in the classroom as a member of the men's tennis team from 2001-04.  Weber was a three-time first team All-Ohio Valley Conference selection playing most of his career at No. 1 singles.  He was named the OVC Men's Tennis Player of the Year and an OVC Scholar-Athlete of the Year as a senior in 2004.  He ranks first at EIU in single season wins with 17 and seventh on the career wins list with 44 despite missing one season due to injury.  As a doubles player he ranks in the single season and career top ten for doubles wins.  Weber ended his career earning first team Academic All-American honors.

Ticket information for both the Hall of Fame luncheon and football game will be available later this summer.